Use the form above to find your loved one. You can search using the name of your loved one, or any family name for current or past services entrusted to our firm.

Click here to view all obituaries
Search Obituaries
Immediate Need
We are here to help you. If you have need of our services, please call us, day or night, at:
732-658-3289
To better prepare yourself, we have provided you with some helpful information regarding the immediate need process.
Contact Us / Location

Ordering flowers from our site ensures that your order will reach us or the family in a timely manner, and your gesture of support will remain acknowledged in the Book of Memories for future generations. We only work with local florists so we can maintain the sense of urgency and quality of your selections. We thank you for helping to support the family during their time of need, and will fondly remember your kind gesture.

To share your memory on the wall of Frederick Awich, sign in using one of the following options:

Frederick was always a spirited young man. Anything he did he put his all into; never limiting himself to liking only one thing, he was multi-faceted that way. He loved to watch cartoons when he was younger which transformed into him drawing vector art which he has some on display on his website http://fawich.com

He also loved to dress well. No matter where he was going, he didnâ€™t want to be caught slipping.

His ability to remember the smallest detail and bring it up years later was unmatched.
He was also this way with music and art. Frederick loved music. He was always going to a concert to see his favorite artist. And with that was his love for travel which he got from his brother Phillip. He would travel to Canada, one of his favorite places, and eat lots different food - poutine especially - and go to any and every art museum.

He was an excellent Uncle. Always taking care of his nephews. Zachary gave him a run for his money, but they became best buds. Zaire was his lil â€˜Big Leek.â€™

His mother, Mary, was a huge influence in his life and she was with him every step of the way. There was nothing that she would not do for him and vice versa. They had an unbreakable mother and son bond. They created memories that would last a lifetime together; from their travels to just chilling at home.

Frederick will truly be missed.

To send flowers to the family or plant a tree in memory of Frederick Omondi Mahia Awich, please visit our Heartfelt Sympathies Store.

Receive notifications about information and event scheduling for Frederick

You will receive any future notification messages.

Show you care by sending Flowers

We encourage you to share your most beloved memories of Frederick here, so that the family and other loved ones can always see it. You can upload cherished photographs, or share your favorite stories, and can even comment on those shared by others. 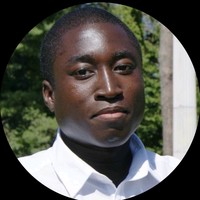